Around 1928, Selmer bought the Adolphe Sax manufacturing plant from Adolphe-Edward Sax (the inventor of the saxophone's son) and produced a line of saxophones -- released primarily in the UK -- as a "complement" to the Super line of saxophones (s/n 11951 to 18700, and possibly up to the first Balanced Action horns [s/n 21751]). 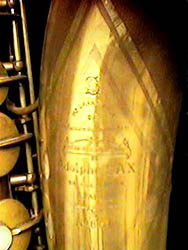 There are at least two versions of these horns:

In any event, these horns were slightly more expensive than other pro horns available at the time, but were not as expensive as the top-line Selmer models. This leads me to believe that these horns were an attempt at cornering the "intermediate" market. This is possible, especially condsidering there is a "successor" to this model: the Pennsylvania.