Selmer finally had to turn around in the early 80's, because they were facing way too much competition from Yamaha and other companies. So, they came out with a better saxophone: the Super 80. 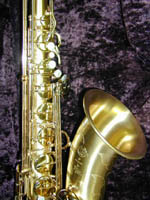 These horns were produced in three series, with the series II and III being produced still, along with a couple subsets (e.g. the "Jubilee", etc.)

The series I horns were OK. Unfortunately, Yamaha's Custom models and Yanagisawas offerings were much better copies of the Mark VI than Selmer's S80's -- and they were cheaper, too. The II's and III's definitely much better and more "VI-like", but the "damage" (such as it is) to the Selmer name caused by the VII debacle has solidified the market for used VI's and new Yamahas and Yanagisawas. 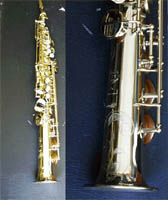 There are lots of mechanical innovations in the S80 series -- the most obvious is probably the detachable neck for the S80III sopranos (directly from the influence of Yamaha). The Harmonic horns have significant neck modifications and harken back to the days of the Buffet-Powell horns.

Some VI's were still being produced when the S80 came out, notably the sopranos, baritones and basses (to approximately s/n 365000) and the sopranino (to approximately s/n 378000). Also, I've heard more than one person insist that the first few horns of these pitches labeled "S80" are "really" Mark VI's. I can't confirm that without checking out one of these horns with a caliper and seeing if the bore size and tonehole placement is identical, but it's something interesting to consider if you're in the market for one of these pitches