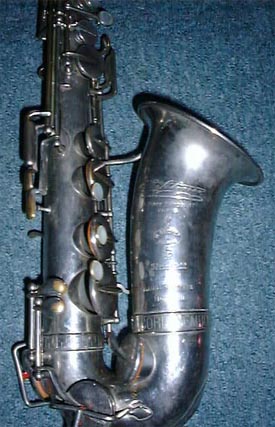 There are at least two versions of the Modele 22:

Within the first 250 or so 22's (i.e s/n 750 to 1000) a bunch of horns were produced with a keyed range of low B to altissimo Eb, a dual octave key, without most chromatic keywork and without rollers.

It was a common practice of European manufacturers to produce a horn with a reduced feature set, essentially based on the "tried and true" design of the A. Sax model -- the patent on which had lapsed many years earlier and was therefore inexpensive to copy -- and sell them as a kind of "introductory model" or "step down" model from a "real" sax, and this is probably what Selmer did, otherwise I can offer no real explanation for these 22's: there 22's with lower serial numbers that have much more advanced features.

The second version of the 22 is the model that's most often seen: full keyed range of low Bb to altissimo F, roller keys, and a single octave key:

[These] Modele 22s were significantly different than their American counterparts. The keys were drop forged rather than cast, and the low bell keys (low B and Bb) were on one side of the bell. The key action was closer and lighter. It is important to note that these horns were not any better, just different. Although many enjoyed the tone and feel of these horns, there were a number of significant design drawbacks. The Modele 22s lacked a front F key, and the range of the soprano and baritone extended only to Eb. On some of the horns, there is an unusual middle Bb mechanism that is mechanically awkward and problematic [see SAXTEK's comments, below]. The baritone lacks a water key and movable neck. The thin narrow gauge connection rods were weaker and not as durable. At the time, professionals still seemed to prefer the superiority of the more established American instruments, or the stellar designs of the Evette-Schaeffer (Buffet) saxophones or the more familiar Couesnon brand.1

Keep looking for Modele 22 photos showing an alto sax with no side Bb key! These are the first Modele 22's and perhaps the first Selmer saxes. The side Bb lever is connected to the Bb key in the top (left hand) stack of keys -- the key with the small pearl. When at rest, the side Bb touchpiece is depressed (in the down position). When the A key (left middle finger) is depressed, the side Bb touchpiece rises to a position even with the side C and high E touchpieces, just like on all other saxes. Then, when the side Bb key is pressed to the down position again, it raises the stack Bb pad -- the one with the small pearl. This is all accomplished with a complex double spring arrangement, much like the G# key on most saxes. I've always wanted one of these early Selmers because of this key. I finally got an example of the odd key (no side Bb tone hole) on my Adolphe Sax, Jr. [horns maufactured by Antoine-Joseph's son, Adolphe-Edouard Sax] baritone, made at Selmer. I've never found an adequate explanation for this Bb arrangement. Although the earliest saxes had no side Bb (they had a closed Bb in the upper stack), the side Bb had appeared on Adolphe Sax, Jr. saxes made before the factory was sold to Selmer. When I was restoring the Adolphe Sax, Jr./Selmer baritone, I took some good photos of this key arrangement, so someday I will be able to clarify what I'm talking about, but the most common examples of the 'no side Bb' horns are early Modele 22's. You can spot them a mile away -- no side Bb tonehole, no side Bb key.

By the way, some of the Modele 22's with the side Bb tonehole were made before the ones without that tonehole!2 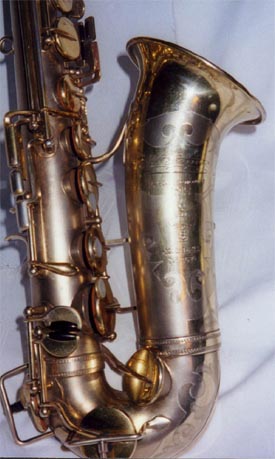 There were also quite a few rare variations produced during the 22, 26 and 28 runs, such as low A instruments (of which I've seen a C melody and alto), curved sopranos (which Selmer, themselves, denies the existence of -- but I have pictures of) and sopraninos (Dr. Paul Cohen owns one). The only horn that was probably NOT produced was a contrabass, except maybe as a prototype. I also recommend watching for horns with alternate keywork, such as altissimo D# trill keys or "Buffet-style" keywork, which was quite probably licensed from Buffet themselves (see my explanation of this Buffet mechanism on the Buffet page)!

All of the above variations are fairly collectable, particularly to Selmer buffs. However, I still think that the Modele 22 is overvalued because Conns or Bueschers of approximately the same era are superior horns - and the Buffet horns from the same era are equivalent in tone to the Selmers and surpass them in construction and intonation -- but are worth less. However, the Modele 22 does have a very nice tone and has its fans, but even they mention some issues...

I've tried a couple of times to get a couple Modele 22 sopranos set up to play in tune and didn't have much luck. Both horns were nice gold plated examples, but despite key height adjustments, lots of mouthpieces, and really good overhauls, I didn't like them.

The altos are a different story. The Modele 22 and Modele 26 Selmers were very small at the neck joint, earning them the name "pea shooter". While the difference in neck tenon size on Selmers after 1930 is noticeable, it is very slight, i.e., a fraction of a millimeter. The difference between the neck joint diameter of the Modele 22 and the diameter of Selmer's New Largebore (just before the "Cigar Cutter") is relatively huge. A neck from a Modele 22 falls into the neck of a New Largebore, "Cigar Cutter", Super, or any later Selmer.

I really like Modele 22 and Modele 26 Selmers. If they haven't been ruined by accidents and careless repairs. If they are carefully restored, they play great with an appropriate mouthpiece.1