Now, the first few horns in the Selmer Super Series ("SSS" for short) -- at least, according to the Selmer serial number charts -- were called the "New Largebore" model, and were marketed as such by Selmer -- not according to just me, but several other folks I've spoken with.

The horn people generally associate with the SSS is the horn that has earned the moniker, "Cigar Cutter", because of the octave key mechanism. However, this SSS model was only available from about 13600 to 17000.

Reading up my old Saxophone Journal magazines, I see that Dr. Paul Cohen, in his "Vintage Saxophone Revisited" column, mentions that the 26 was called the "Largebore" and was marketed as such, and reasons that this is so because the 26 has a larger bore than the 22.

(The existence of the New Largebore model is also championed by former Selmer employee, Ralph Morgan, on the SOTW Archive Board.)

However, there's an SOTW thread that was started regarding the horns that Selmer says were produced in the late Modele 26 reign. The upthrust is that the keywork looks different than early 26's.

Well, that got me wondering if the last few 26's were significantly different than the first. Turns out, that if you track the alto design throughout the years, there are some definite differences: 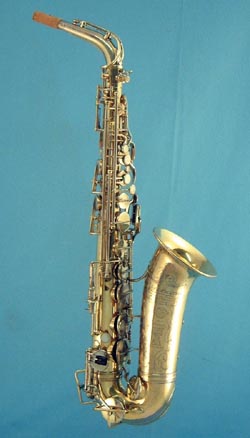 (Again, note that changes in tenor design were behind alto design by a bit and other pitches changed even more gradually.)

So, my working theory:

A. The Selmer Super Series was really introduced around s/n 9000, when the 26 changed to the "Largebore" design and the Selmer model breakdown on their official serial number chart is wrong.

B. Selmer introduced a model called the "Largebore" or "New Largebore" around s/n 9000 (with some "prerelease" horns available earlier). The Selmer Super Series wasn't really introduced until the "Cigar Cutter" around s/n 13600 -- indeed, altos weren't engraved "SSS" until the Cigar Cutter and tenors weren't engraved "SSS" until even later, around s/n 17000 -- and the Selmer model breakdown on their official serial number chart is wrong.

I rather like B and think that's the most accurate explanation.

Here are some comments from frequent contributor, SAXTEK:

"... First there's the Modele 22, and then the Modele 26, which look the same except for the early 22's with no side Bb tone hole. The next Selmer was called the 'New Largebore', according to former Selmer employee Ralph Morgan. This horn really looked like the Modele 26, with the same octave mechanism, but it was a drastically different saxophone with a completely different bore. You need a micrometer to see the difference, but since the bore really defines the saxophone, this was a really new horn.

"The 26's and the [New] Largebores both had the characteristic Selmer sound, and the small bore 22's and 26's were plenty loud enough, but the [New] Largebore could be described as the start of the modern Selmer. The [New] Largebore still lacked the Super's beautiful, sculptured neck receiver that held the neck screw and the lyre screw. The [New] Largebore's lyre holder was a separate piece, like on the Modele 26. The bridge piece was like the bridge on the Cigar Cutter that followed later. They generally didn't have a wishbone shaped back guard like on the 'Supers'. The first alto I ever played was my father's New Largebore, and I'd like to get it back today. I suspect that there was little difference from the Cigar Cutter as far as playing characteristics."1