Note that I depart from the official Selmer serial/model chart for the Super Series of horns. This is essentially due to the research I did on the Modele 26/Modele 28/New Largebore.

All of the below, except for the earliest tenors, are engraved "SSS" on the bell.

I tend to believe that the bass, soprano and sopranino used earlier Largebore/26 designs. I don't think any baris actually used the Cigar Cutter octave key design. Therefore, for MY ease of use, I'll put pictures of these horns under the "Cigar Cutter" heading and put a note in the picture directory. 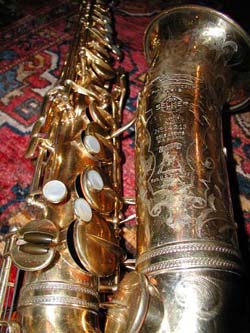 "After the New Largebore came the Selmer 'Super' [Series] saxophone. As with other Selmer models, this was a blanket term that actually covered more than one horn. Many 'Supers' are Cigar Cutters, a name not actually officially used by Selmer. (I once heard a story that Selmer discontinued the 'Cigar Cutter' octave mechanism because it violated Buescher's patent on their improved octave mechanism. That's hard to believe, because the Selmer mechanism didn't look at all like the Buescher. Too bad, because the Cigar Cutter octave mechanism was completely dependable. If all the corks fell off, it made noise, but it still worked.)"1

"It might be well to point out that, though there is a mere handful of so-called CIGAR CUTTER tenors which surface once in a blue moon, they were never a regular production model, and so were never listed by the company.

"The nickname, 'CIGAR CUTTER' was hung on the first 2000 or so SUPER altos made, because the flat plate in the octave mechanism had a diamond shaped hole in the middle of it, making it look like the cigar clippers many men carried. The French were incensed by this 'afront ' to their beautiful saxophone, and so changed back to a more conventional configuration."2

"The next 'Supers' introduced the octave mechanism with the 'rocker' that looked like a tiny teeter-totter. Selmer has made several modifications to this idea, but it still exists on the newest Selmers, and it is the most copied mechanism in saxophone history. The photos of my 1719x horn show the first rocker-type octave mechanism. The ends of the rocker are tiny gears that mesh with the other parts of the mechanism, resulting in perhaps Selmers finest and most foolproof octave mechanism. There were no corks except on the thumb and under the octave spur, and no tubes except where the spur contacted the neck octave key. The mechanism was silent, with no sloppiness and no 'mushiness', and it was a work of art. This horn is finished in burnished gold, and the engraving (lots of it!) features butterflies. I hope you like it."1

This is essentially a small improvement over the "Super" alto and tenor (I've not seen any other pitch stamped "Radio Improved") and incorporates minor adjustments in keywork (such as the fact that the alto again has a redesigned G# cluster) and a redesigned neck. The major interesting feature of some of these horns is the interesting "teakettle" octave vent, a feature which continued with some of the early Balanced Action horns. 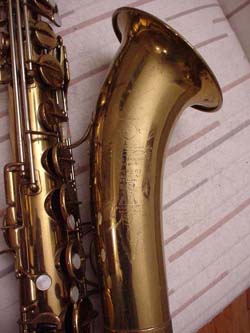 Comment from Jason Dumars on the "teakettle" octave vent:

"The design did improve the intonation on the higher notes *some*, but the timbre became a little fuzzy/muffled. [My] alto had a much larger octave vent, [although] I'm not sure if that was factory or done by a later owner. On the tenor, the vent was a real visual distraction. It reminded me of the "Opti-Grab" in the movie, The Jerk. Long term use of one of those might lead to permanent ocular damage! :)"

The existence of these horns is another example of Selmer's poor maintenance on their serial number chart, as there are obviously Radio Improved horns produced well into what Selmer calls the "Balanced Action" range.

By the bye, I believe these later horns with the "Balanced Action" engraving are special-order models from people who liked the Super keywork and thought the left-hand bell key arrangement was faster. 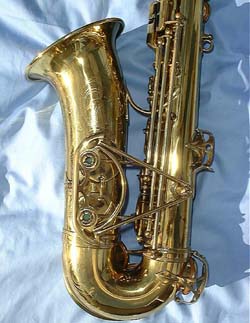 These horns, an alto and tenor, were released toward the middle of the Balanced Action run. This is Selmer's rarest model, with possibly only 200 horns produced.

"I've seen two Jimmy Dorsey model Selmer altos. They have sheet metal keyguards, like the Balanced Action, but the bell keys are on the left side, like the Cigar Cutter. The bell keyguard is a bit odd, because it has a keyguard just like the Mark VI grafted to the wire 'wishbone' of the earlier Supers (Cigar Cutters). My own personal opinion is that Selmer had some Super bells left after starting Balanced Action production, so they used them. The Jimmy Dorsey horns, however, play great and Jimmy did use one."1

Note that the keywork on the Dorsey alto is the same as found on the "Super", not the Radio Improved (e.g. the G# cluster).