The major question about the Mark 7 has always been, "Why?" There are several theories, but I don't like any of them: 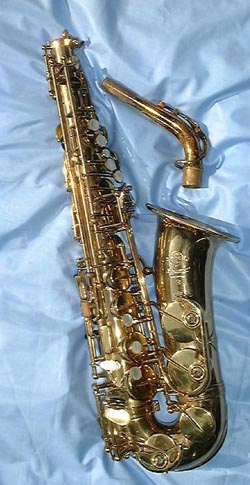 Anyhow, it's most probable that the 7 design was cheaper to construct than the VI and Selmer's test market said that the 7 was "close enough" to a VI.

However, as the successor to the VI, the 7 failed miserably. Definitely not at first, but slowly ...

If you go into the music store and try one of these horns with the mindset, "This is just another pro horn," you'll be OK, but if you go into the store with the mindset, "This is the successor to the Mark VI. It's gonna be real kewl," you'll be sorely disappointed, not because the 7's a bad horn, but because it definitely has a different look, feel and sound than the VI: it's got those funky ergonomic keys, it's much heavier and it's darker.

There is one major "innovation" the 7 introduced: this is the first model line, excepting the marvelous Conn-O-Sax, to feature an altissimo F# key as standard equipment. Considering this was a somewhat expensive option on earlier Selmers, this might have been a good marketing tool.

Officially, Selmer never produced anything other than Mark 7 altos and tenors, and only low Bb versions of either. However, occasionally, you'll see people saying, "I've got a low A Mark 7 alto!" No, you don't. The low A alto was a Mark VI design: no keywork differences, no bore differences. No "Mark 7" engraving. (See my note on Selmer serial numbers, below.)

UNOFFICIALLY, I have seen pictures of at least two baritones that are labeled "Mark VII" quite clearly -- and I've heard of one soprano and sopranino, too. However, these horns do not have the ergonomic low C/Eb keys and I doubt if these horns have anything in the way of a different neck or bore.

Now, Selmer's always had custom models. While I note that the Mark 7 baris I've seen had "normal" VI keywork, I wouldn't be overly suprised to see one with the 7-style ergo keys. I've also got pics of a VI alto that has a G# trill key and forked Eb (with attendant vent), like a Modele 26, so we have some precedent.

There always is some "fudging" of Selmer models around the time that a new model comes out and you may see, for instance, a bari labeled "Super 80", but with all the features of a VI. I think the reasoning is SUPPOSED to be that "what makes the model is the bore, not the keywork".

A couple of very important things to note:

Now, I occasionally get e-mails from folks insisting that their (for instance) Mark 7 is really a VI, regardless of the fact that it's easily inside the serial number range for the 7. Their reasoning is, unvaryingly, that the horn has the same "look and feel" of the VI, so therefore it's a VI. I then ask for pictures. It's an obvious 7. The reader then gets mad when I tell them they have a 7.

I generally think that if there's a model name stamped on the horn, then that's what it is. However, in the case of this "Mark VII bari", I tend to think it's logically impossible that Selmer just happens to have an entirely different set of tooling for these horns lying around to have only a half-dozen or so "Mark 7" baritones -- it's just too expensive to do that. I CAN accept that the "Mark 7" bari does have a tweaked neck and/or different keywork, but I doubt if the bore is any different. I'd want someone to take a caliper to that thing to prove me wrong.

Of course, the "VII" engraving could just be a mistake, and Selmer meant "VI" :)